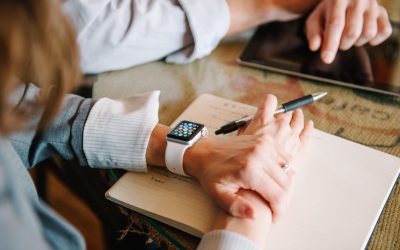 At Oak City Labs, technology excites us. We keep a keen eye on emerging technology and enjoy observing its impact on the world around us. For one of our last blog posts of 2017, I asked our developers for a technology that impressed them this year, and a technology they are excited about for in 2018. Read on for the results!

Burgeoning from the recent announcement that Apple is investing $390 million into its Face ID and Airpod tech, the hype around Face ID has grown exponentially since its announcement at the iPhone X release event in September. Though it has had its troubles, Face ID is an exciting technology that pushes the boundaries of facial recognition and its plethora of applications. Jay is most excited about the idea of continuous authentication when it comes to Face ID.

A new challenger has appeared in the market for smart home connectivity. The Apple HomePod is billed as a “breakthrough home speaker” by Apple’s VP of Worldwide Marketing, Phil Schiller. Unveiled at WWDC 2017, the HomePod houses an impressive woofer, tweeter array, microphone array, and A8 chip. All these parts were specially crafted to fulfill Schiller’s definition of a successful speaker, which must: “Rock the house”, have “spatial awareness”, and “be a musicologist.” According to Jay, he is looking forward to “Alexa done correctly.” Them’s fightin’ words, Jay.

For Android developers like Taylor, Kotlin is the newest hotness. Much like Swift is overtaking Objective-C as the programming language of choice for iOS apps, Kotlin is set to compete with Java as the main language for developing Android apps. In 2017, Kotlin gained 100% interoperability with the Java language and Android toolsets, and we are excited. By design, Kotlin is concise, safe, and gets along well with all popular IDEs. Taylor enjoys that Kotlin is less verbose than Java and is so excited about it that he wrote a blog post about it.

Looking Forward to in 2018 – Augmented Reality

With Google and Apple announcing their new, updated AR platforms at their respective conferences this year, the world of augmented reality seems full of possibility for 2018. Google recently launched a Star Wars AR for the Google Pixel 2 (seen above) that allows people to appear alongside everyone’s favorite Galactic Empire. Apple recently released an awesome commercial featuring their AR technology, which appears to include placing a piano and other objects in the area around the user. From games like Pokémon Go to architectural design solutions, we fully expect 2018 to be a year of rapid growth for AR. The wearable market for AR most excites Taylor for the upcoming year.

Looking Back at 2017 – Apple Machine Learning for iOS

Smart watches are nothing new. According to certain estimates, the US wearables market is set to double by 2022. Announcements by Apple this year that the Apple Watch will contain more advanced sensors to be used to monitor health and promote good fitness practices. From keeping track of heart rate to measuring heart rhythm, the Apple Watch will provide an easy and convenient way of tracking many aspects of people’s health. Trevor is excited for the data gathered from these devices to provide more accurate data which can be used in studies to help the greater population. For instance, the tracking of blood pressure for diabetics and irregular heart rhythms to predict heart conditions.

Looking Back at 2017 – Rust (Programming Language)

While I, myself, am not a low-level programmer by trade, I have experience working with low-level languages such as C, C++ and Assembly. Through the grapevine, I learned about Rust, a systems programming language that, according to its docs, is focused on three goals: “safety, speed, and concurrency.” Rust was voted the Most Loved programming language of 2017 on Stack Overflow for the second year in a row, and continues to push to replace C++, the kingpin of low-level object-oriented programming. While not directly applicable to what we do here at Oak City Labs, it has been fun seeing an actual contender for replacing C++ come onto the programming scene.

My last blog post about Progressive Web Apps highlighted some of the pros and cons of the up-and-coming software ideology touted by Google as the future of webapps. Earlier this month, Google announced the release of an optimized version of Android called Android Go. Optimized for devices with less RAM, Android Go contains a version of Google Maps called Maps Go, which is a progressive web app. While not as fully-featured as Google Maps, Maps Go provides a lightweight, offline experience for its users that runs efficiently on their weaker devices. I am most excited to see if companies like Facebook, Twitter and Reddit turn their websites into progressive web apps instead of building native, or if they choose to use a progressive web app ideology alongside their native apps.

Gadget technology witnessed impressive gains in 2017, with a large emphasis on wearables that streamline everyday processes and provide value to users. Similarly, both Swift and Kotlin (the future of iOS and Android programming, respectively) saw a great increase in focus from developers looking to match pace with cutting-edge trends. Data gathered from devices such as smart watches and home automation devices will continue to provide valuable insight into human actions and needs that will further shape the development of such devices. It’s no question that 2017 was an incredible year in technological development, and we can expect much of the same in 2018. Viva la technology!