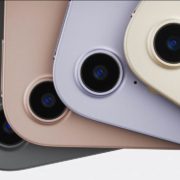 On September 14th, 2021, Apple held its annual iPhone-centric event, announcing their new iPhones and iPads. If you missed it or want a quick breakdown, watch our update below. We also talk about what features might be a gamechanger for companies in the healthcare and life sciences industry.

Jay, what did you think about today’s announcement?

Jay: It was interesting. In general, you’re seeing issues where the iPhone and even the watch are mature products. So, there’s nothing earth shattering they’re going to add to it. For the iPhone and iPhone Pro, I just wrote down “more better”. It’s the same stuff they do every year.

On the phone, they added the cinematic mode where they track the person, and focus on who’s in the foreground or the background, which is cool, but that’s a super niche issue.

Carol: Yeah, but I could see as a small company or startup, if you want to record a professional video, you now have this device in your hands that could make it look more professional.

You mentioned earlier today that there’s still a lack of audio features.

Jay: Yeah, you’re still walking around with that boom mic. I don’t know if that’s a thing that’s feasible to fix from a phone – or if that’s something they care about. Professional people are still connecting external microphones and audio capture equipment.

Some of the more complicated features that we’re building in the healthcare and life sciences industry that you have to have a server to process, we’re very quickly moving to where we can put that on the phone, right?

Yeah, they continue to update the neural engines on the devices so they’re faster, and they’re running more and more stuff on the device. They mentioned that all your Siri requests are processed on the phone where before it was on the cloud, so, if you had a flaky internet connection, Siri would have gone away. Now all of it is happening locally.

They showed a clip from a Tennis training app. They were doing real time processing of taking those high quality images off the camera and tracking where the ball lands.

I saw a demo a couple years ago for basketball, where they were doing body tracking of the shooter. If they were releasing at the top of their jump and registering if the ball went into the hoop. It’s set up off to the side, but the player is wearing AirPods. All that audio is coming back realtime and feeding them information.

Carol: That’s interesting because I remember when we first started the company, and we talked to a few prospects that had to manufacture their own devices or partner with companies to put sensors all around. So, I wonder if we’ll see consolidation in the future, where  you’re just like here’s the watch, iPhone, and AirPods – go.

Jay: Right, instead of sensors, you’re just using the super fancy phone to do that.

Anything else stand out to you?

There’s a special place in my heart for the iPad Mini because I love tiny computers. The Mini hasn’t seen an update in a couple of years, and it was a big update. It got a second generation Apple pencil, touch ID, USBC, 5G – it got everything you could want in a pocket iPad.

Why would I buy an iPad Mini over a larger iPad?

The iPad Mini is now more of a mini version of an iPad Air. It has all the features that before you’d only get on the iPad Air.

All the iPads got the center stage feature. It uses the FaceTime camera and has a really wide field of view. Traditionally, we’d have robotic cameras that would face track, but now, instead of physically turning the camera, they pan different parts of that sensor. Coupled with the software with face tracking, it’s an interesting feature for FaceTime and Zoom to follow one person around or focus on the speaker when a group is using it.

If you had to buy an iPad for your Mom and Dad, which one would you get?

Oh, I’d totally buy the cheapest one! For somebody who’s just going to use it for FaceTime, solitaire, and checking emails, the entry one is great. You need to have a solid reason to get one of the other ones. Do you need the pencil? Does it need to be small like the mini?

**The above interview has been transcribed for clarity and brevity.**

Building an app for the iPhone? Check out our article, 3 Steps to Create a Benefits-Oriented Mobile App Onboarding, before you start. 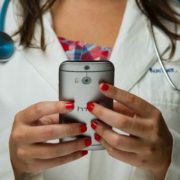 You probably know that many of the world’s most recognizable businesses, like Apple, OculusVR, and Under Armour, started as side hustles.

One of the things we love about the health tech and biotech industry is that most of the founders we work with have a really impressive – and often demanding – main gig.

We’ve partnered with neurosurgeons, leading experts in swallowing disorders, and even a tech entrepreneur who studied under John B. Goodenough – the guy who invented the lithium-ion battery.

We’ve had the opportunity to work with incredible people and watch as they scale their passion projects into successful software businesses. So, if you’re looking for inspiration or motivation, watch our video to learn more about their projects or continue reading for a short summary of each.

THX Rx, originally WellSpent MD,  is a health and wellness app for physicians. Founded by two neurosurgeons at the Department of Neurosurgery at Duke Health, the app provides positive news, a time-banking program, access to wellness resources, and wellness data collection to boost positivity in the workplace.

We remember when we first started developing the app, it was originally going to only be used to track engagement within the Department of Neurosurgery at Duke Health. But, now, with the release of version 2.0, the app can compare pre-COVID-19 data with current data.

Vitalflo is a remote patient monitoring app that helps to prevent asthma attacks before they happen.

The company was founded by Luke Marshall, who studied under John B. Goodenough – the inventor of lithium-ion batteries. Marshall pulled the tech out of North Carolina State University to bring it to market. Our team has a lot of North Carolina State grads, so it was interesting to see that tech pulled out of NC State and get to help them at the beginning of this project.

The Florida Dysphagia Institute (FDI) is one of our favorite clients to work with. We always need to leave about 10-15 minutes at the end of the call for jokes.

Even though swallowing disorders are awful for the sufferers, there’s a small community of researchers who strive to ensure better treatment and evaluations.

FDI offers resources and educational courses that provide solutions for swallowing disorders. We help them with mobile and web development, which they use as a tool to further their mission.

For anyone who’s here looking to start a software side gig, check us out at Oak City Labs. You can even schedule a free consultation to run your idea by us, and we’ll let you know what we think.

**The above interview has been transcribed for clarity and brevity.**

Getting started with your software development plan? Here are 5 things your brief should include.